So, You Want to be a Better Paddler? Learn How to Sprint.

So, You Want to be a Better Paddler?

I’ve long contended that sprinters (and here I am talking about those who compete in 200m races at the highest level) are the most technically proficient paddlers.  Being able to produce the remarkable power outputs these athletes do at such crazy high stroke rates can only happen with technical mastery of their stroke at the highest level.  Their ability to paddle so fast is not just the result of specialized training allowing them to develop the unique physical qualities required to excel in these races, in my opinion, it is because they are the ones with the best technique.

What a Good Sprinter Isn’t

Let’s be perfectly clear about what a “good sprinter” is.  It’s not the paddler that consistently darts out in front at the start of your local distance races only to fall back and eventually disappear as everyone else settles into their traveling pace.  This is simply an example of a paddler who may have some talent but hasn’t done the homework required to either understand how to pace their race or develop the aerobic base that allows them to grind it out for extended periods of time.  It’s also an example of a paddler who only looks fast because the others are actually trying to race the race distance, not just win the start.

Instead, a “good sprinter” is someone who can consistently paddle fast over short distances and can consistently outperform others over the same distances.  At low levels of competition, talented paddlers can be “good sprinters” without real training; relying on a superior innate connection with the water, superior paddling rhythm, and perhaps the genetic gift of a high percentage of fast-twitch muscle fibers.  At the highest level, sprinters are specialized athletes who have mastered the ability to establish the best connection possible with the fastest stroke rate.  They have developed the ability to produce huge amounts of power each stroke without using any more muscle than necessary.  They’re able to separate the muscles they need at every point in the stroke from all other muscles in their body and engage only those muscles, maximally, while relaxing everything else.  And of course, they have trained to be able to sustain this maximal effort for the entire duration of their race, pacing each race perfectly so that they would have nothing left to give if their race were even just one meter longer.

What a Good Sprinter Is 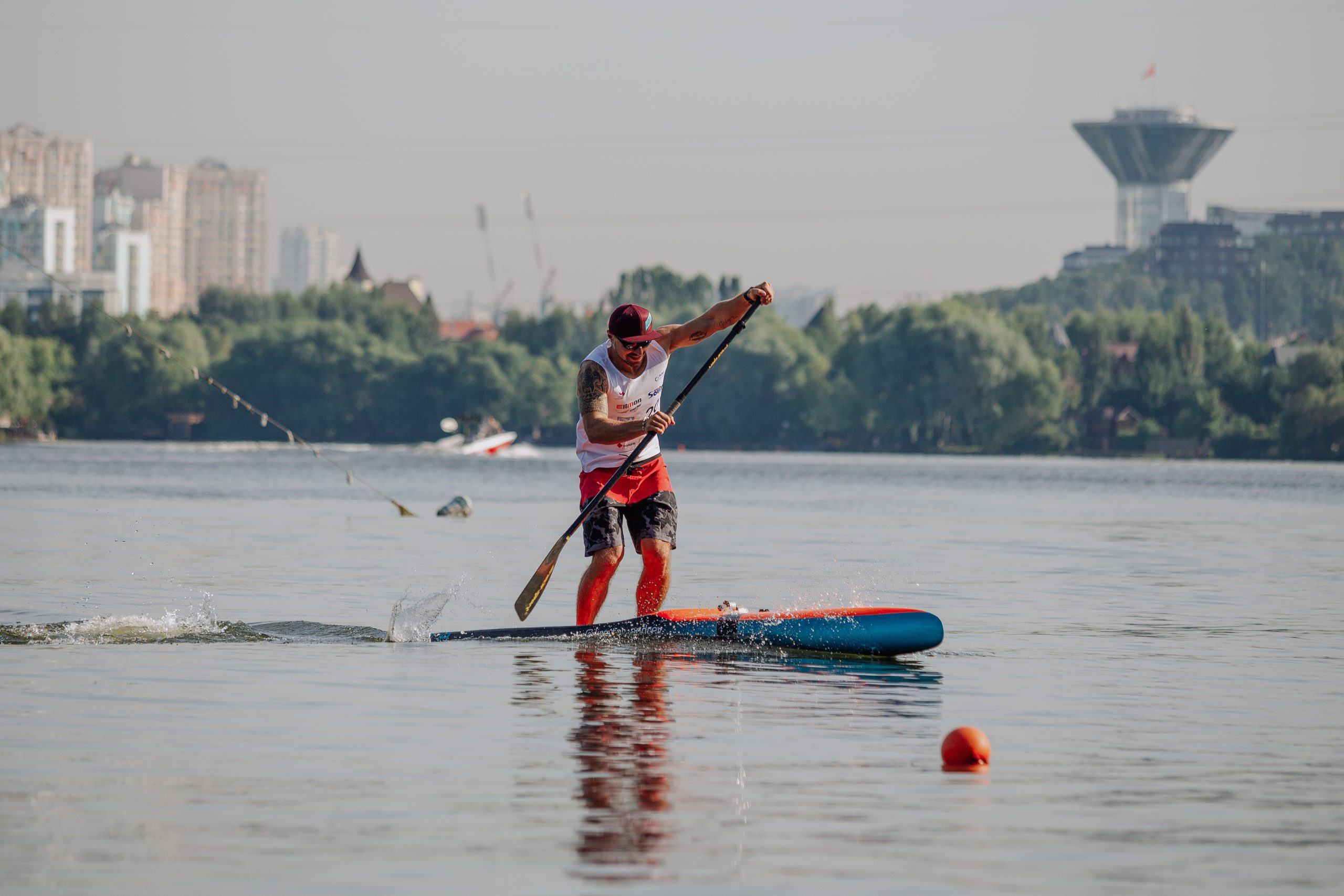 For most paddlers, it’s not the physical abilities alone that one derives from sprint training that is going to make them better over the distances that most SUP paddlers typically race (5km, 10km, and longer). Instead, it is a combination of the physical and technical side of sprinting that is going to make paddlers of all descriptions better.  Here’s what being a better sprinter can do for you:

The concept of a “speed reserve”

Similarly, imagine a guy who walks into the gym that can press 350 lbs for a 1 rep max.  Even if this guy is not a paragon of endurance fitness he’ll be able to toss around 100 lbs, which is only 28% of his 1 rep max, much more easily than you, and almost certainly be able to do more reps.  The guy who can lift 350 lbs has a considerable “strength reserve” on you when it comes to lifting a lighter weight like 100 lbs.

While the speed reserve difference between two paddlers who are close to the same sustained speed in a shorter sprint is going to be negligible, the paddler with the better sprinting technique (even if not actually the faster sprinter) is going to likely have an advantage in a longer race because they’re more efficient.  So, whether it is through having a bigger speed reserve or better ability to be “relaxed” while producing high power outputs (or both), being a capable sprinter has a tangible benefit to your ability to perform over longer distances if you are doing the aerobic paddling training you should be.  There’re definite advantages to being a “good sprinter” whether you are racing sprint races or not.

It’s definitely worth taking some time in your training and investing it in learning to sprint better.  It’s a process that takes time and is both challenging and fun.   The first step is to address your technique.  Establishing sound technical movements at slower speeds becomes the foundation upon which you can learn to produce these movements at faster speeds.  Then, with some specialized sprint training, you can develop the neuromuscular adaptations that allow you to recruit a much higher percentage of available muscle fibers to even faster, more explosive paddling movements that produce much more power and much faster stroke rates.  You’ll find yourself going faster than ever in sprints and in longer distance races as well.

Special Publication note: If you’re interested in improving your sprinting, consider reaching out to Coach Andrey and discuss the Paddle Monster programs available to help you achieve your sprinting goals.

Coach Cain
Larry Cain began his career in 1974 at the Oakville Racing Canoe Club, now the Burloak Canoe Club, in Oakville, Ontario. Cain competed in three Summer Olympics, winning a gold medal in the C-1 500 m, and a silver medal in the C1 1000 m events. He also won a silver medal in the C-1 1000 m event at the 1989 ICF Canoe Sprint World Championships in Plovdiv. In 1984, he was made a Member of the Order of Canada. In 1997, he was inducted into Canada's Sports Hall of Fame. A trail in Oakville has been named in his honour running along the town's waterfront where Cain trained. He worked as a coach, preparing paddlers for the Olympic Games in Rio. In 2016 Cain co-founded Paddle Monster.