It’s not often that the water temperature is significantly warmer than the air above and definitely not in Texas. But stranger things do happen and that is exactly what played out this past weekend in Austin at the latest edition of Paddle For Humanity.

The day dawned to the coldest September day on record with the air temps hovering in the early 60s and intermittent rain showers descending from the ominous cloud banks hanging above. Was this really possible in Texas of all places?

It is quite possible that this set of unlikely meteorological circumstances was in fact a mirror for something else that is happening in Texas. Well known for it’s music, college life, culture, becoming the next Silicon Valley and it’s rapidly growing skyline, Austin is a city blessed with a warm and temperate year round climate.

A city of people who are mildly obsessed with health and fitness and, it is no wonder that as the summer temperatures soar into the 90s and beyond, the people of Austin have flocked to the damned waters of the Colorado River and added SUP to their repertoire of year-round outdoor pursuits.

As Saturday dawned and the warnings of the ominous weather forecast rang true the Texas Rowing Centre sprang into life, not with rowers but with oars the stand up variety. It was clear that the precipitation was going to do little to get in the way of the days events.

With a 5k and a 10k option circumnavigating Lady Bird Lake, the numbers on the line spanned the width of the lake resembling a start line more consistent with Battle of the Paddle than a local Saturday morning race.

With these events being as much about racing your buddy, it was clear from the registration party of the night before that there were going to be more than a few match ups and side line bets.

The conditions of Lady Bird Lake may have been flat but strategic avoidance of the large weed beds half way down the course meant not dragging 10lbs of semi-submerged flora from the under side of your board and ultimately going faster or 1.5 mph slower.

With the drizzle showing no sign of letting up and the temperature being warmer in the water than above it, Rule 7 provided the perfect chance to warm up by getting wet. Infamous for its ‘no-rule’, ingenuity and scull duggery came to the fore. Brooms were the new paddles, running jump skim starts from the dock, ‘sweeping’ became a means of forward propulsion, bumper boats, the accidental dragging of anchor chains, blocking, throwing of brooms, general sabotage and more, much to the delight of the dockside spectators.

Be sure to watch out for more Paddle For Humanity events as dates are announced for 2015 over the coming months.

Paddle For Humanity Austin Results can be found at the following link: 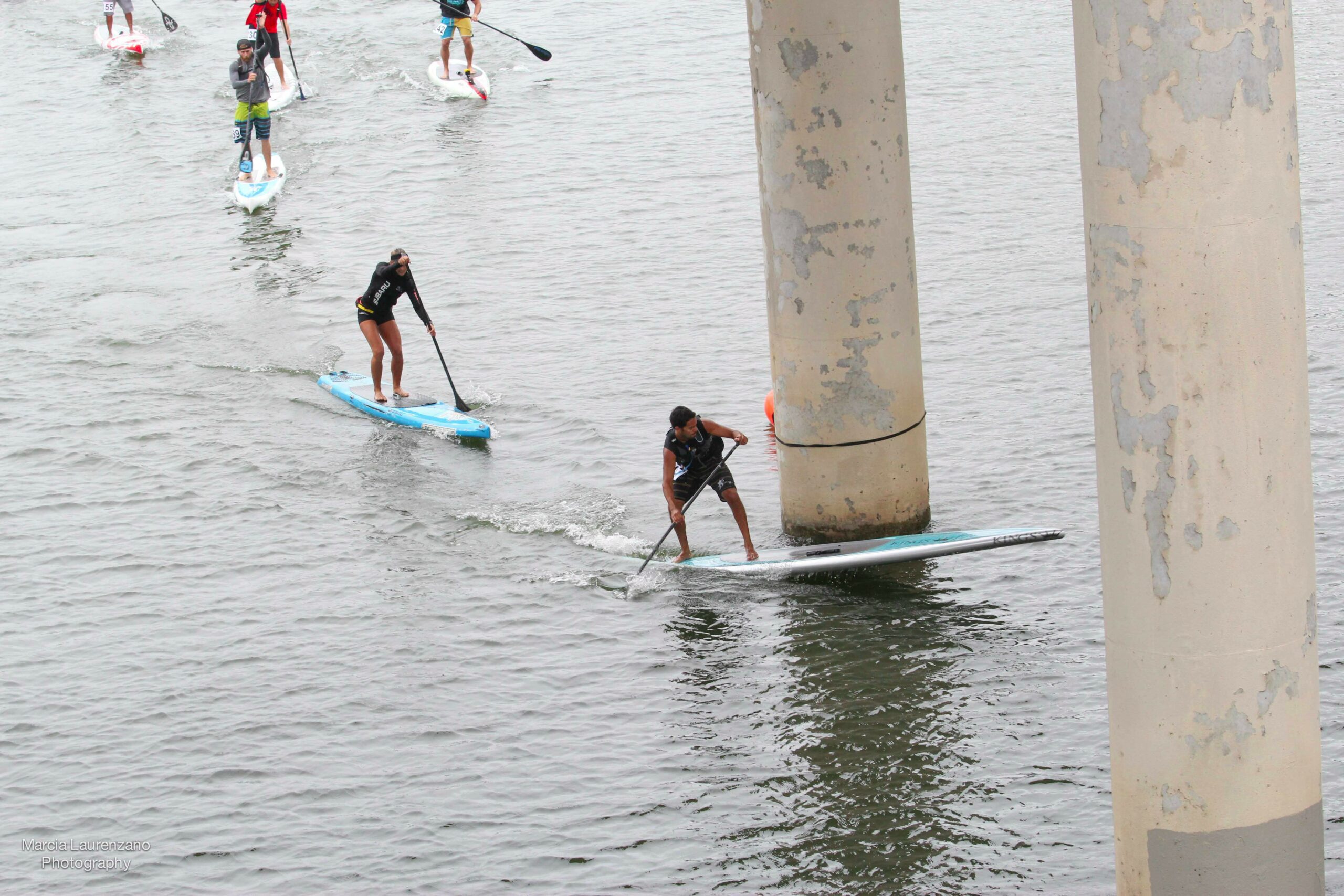 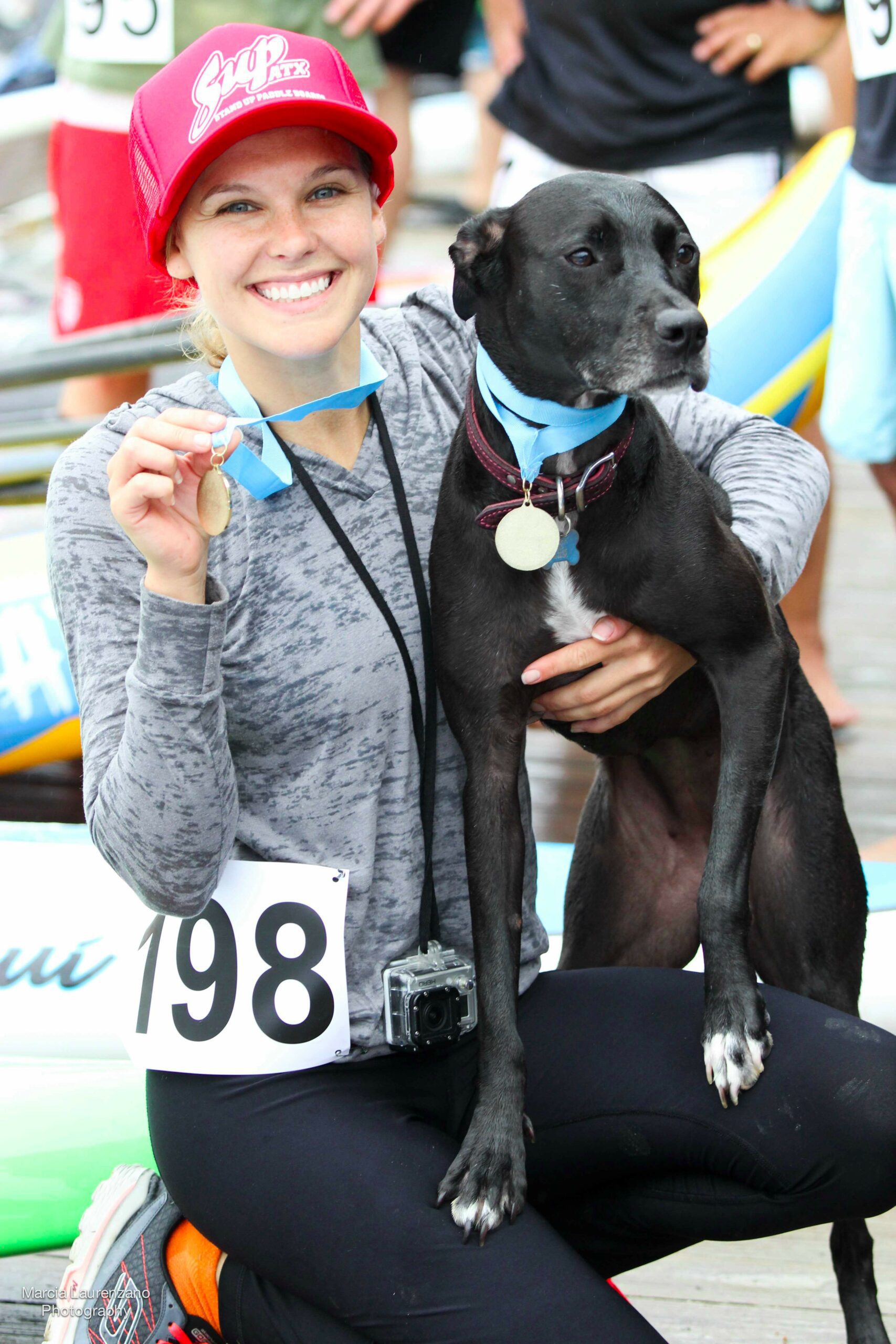 The Story behind Paddle For Humanity

Paddle for Humanity was brain child of Pete Stirling and his former business partner Macon Brock.

The founders of the Watermans sunscreen brand, they wanted to create something that helped others experience the same reasons why they loved the water and loved to paddle,

What separates Paddle For Humanity from the proliferation of events that have popped up around the globe in the past five years is that it’s more about the paddling and the after party than who paddled the fastest. Yes, this the event where everyone’s a winner both on and off the water.

A symbol of unity, it’s an event that is characterized by utilizing the best of the local environment has to offer, be it a beach, a river or the closest local bar.

Rooted in philanthropy, it was the plight of a good cause that gave these two guys a reason and purpose to bring their event idea to fruition.

It was in the fall of 2008 that Stirling and his Waterman’s wingman Macon were at a fund raising event for Surf Aid International. Both were moved by what the fledgling organization was doing and pledged to do something to help. Paddle for Humanity was born and in the years since, a minimum of 20% of registration fees has gone to charitable organisations, either the nominated choice of the participant or the benefactor of the event.

SUP was in its infancy, there were a handful of races at the time and stand up paddlers were beginning to regularly attend the races.

“The first year we paddled at Doheny State Beach for SurfAid International and immediately afterwards we started receiving requests to take on additional non-profits, recalls Stirling.

“Our solution was to give the paddlers a choice of whom they wanted their donations to go to.  The model was simple, 20% of all registration went to the selected or their nominated not-for-profit organization and the paddler was free to raise additional funds as he or she saw fit.

“We started moving into new territories as well.  Deerfield Beach was our first East Coast destination. It changed the whole way I looked at the event series and we immediately started to look for ways to not only raise money and awareness for our NPO partners, but also show paddlers the social and political power of our community if we all act as one.  Two months later we held our first event in Washington, DC.

“DC is a ridiculously athletic and young community that runs, bikes and, more recently, swims. I think close to 70% of the people that showed up were on inflatables, with their paddles backwards and gear ranging from wetsuits, vests, helmets and dive knives to one guy that did the whole event in pants and a button up shirt.

“When we showed back up the next year over 200 people, from as far away as Miami and Vermont… SUP in DC was never the same.

As PFH develops, expect to see it continue to grow, to visit new locations and fulfill the goal of bringing the paddling community together.

PFH is for everyone. Something for the whole family to enjoy any way they saw fit, be it the competition or community camaraderie. It is rarely sticks to one format, instead adapts to the local environment and culture.

Former and present PFH locations include: