As we discussed in our master post, the results of the 200M Sprints – The Clash of the 200M Titans – is the first race we’re reviewing from our 2020 Virtual Race Series.

The 200M sprints were an exciting addition to the Paddle League in 2020.  Many of us train and race in longer races, as a result, the idea of all-out for 200M and how paddlers would react and what we would learn was an exciting proposition

To recap, here were the rules of the race:

“The Clash of the 200m Titans is a 200m sprint that is intended to weed out the fastest short-distance paddler on the planet! This race requires skill in sprinting, starts, technique, and strength, and a great connection with the water to find the one person that can pull it all together quickly and pound out the fastest time!”

This was a one direction, current-less race where tracking time to the second was critical.

The shortest distance many of us had ever competed in was the 5k race, as sprints are not common in local or regional races like they are on the pro circuit.

The overall fastest in this race is as follows.  A big congratulations go out to the following:

A Special call out to the groms for SUP 14

A few more observations, the vast majority of the times for the men and women were in the 1 minute 4 second to 1 minute 13-second time. Boat vs SUP had little impact on times where you’re dealing with 200 M…although Robert Norman came in at 54 seconds, the fastest SUP time was 55 seconds. 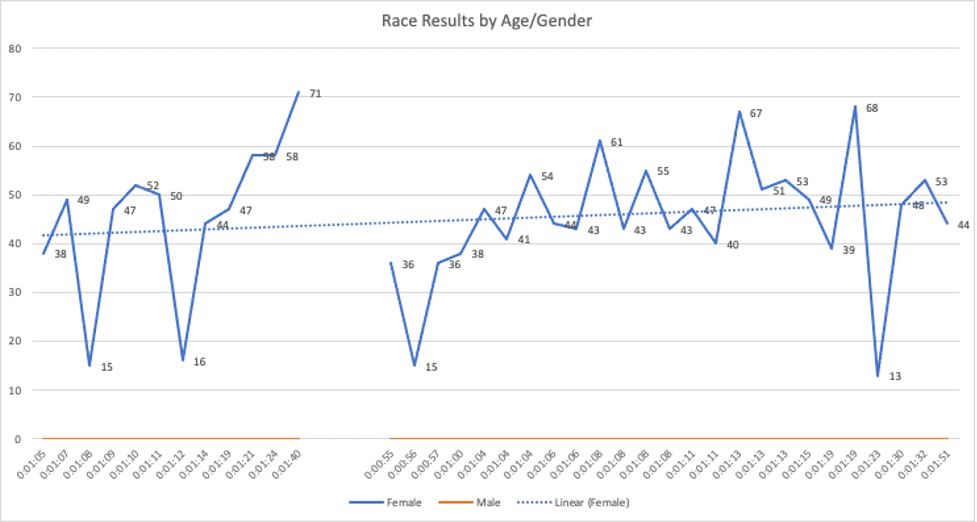 The above graph shows the spread of times for this race.  The Paddle Monster team is very interested in supporting sprint racing as part of the local race scene.  Watch the race circuit, as well as 2021 VPL announcements for more on this subject.

Thanks to everyone who participated in this race and contributed to this super fun event.  Now that we all have a baseline for sprinting, we can continue to measure our progress and see how we improve throughout our training.

Congratulations to ALL VPL 200m race participants for a badass performance.  Detailed results can be found in the final results boards below.

Tim Myers
A paddler of SUP and OC-2 in South Florida. Also a writer, consultant, father, paddler enthusiast, surfer, and the tech mind behind @paddlemonster. Partner in the encouragement and promotion of the sport through FB #954PaddleCrew and more.