I’ve now owned my 2020 SIC Maui RS 14×23 for just about a month. I’ve had a chance to paddle it in a variety of conditions, including various levels of chop, upwind, downwind, and recently completed a 31-mile virtual Chattajack on it.  At close to 100 miles paddled total, I feel like I have sufficient time on the board to register some qualified opinions. The word is out that there will be no changes in the RS board line for 2021, so this review should serve as a sufficient guide to those looking at the newer model. I’ve paddled a SIC RS 14×24.5 for the last two seasons, so all comparisons are to the prior model design.

The most dramatic change of the RS has to be the reshaped nose. SIC Maui describes it as “pulled in slightly”, my real-world plain language take on that, is there is less rocker, and it’s a lot more “pointy”.  The net effect is that the nose is considerably quieter, creates dramatically less splash, and feels more efficient. The shape of the nose coming into the rails has also been revised, with the prior model it was a fairly even radius from the bottom of the nose to the top deck, whereas the new version is a bit more square and forms more a defined rail towards the nose. I like it, it absolutely lives up to the claim that it is easier to paddle upwind, and it just feels and sounds like it is working better. 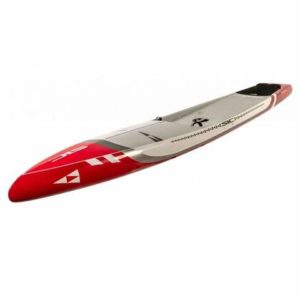 While the overall volume is unchanged from the prior model, the volume from the thinned nose had to go somewhere. The sales literature claims it’s stacked higher on the deck, but I was unable to detect any change. However, it does feel to me that volume has increased on the rails through mid-board, and the tail looks and feels considerably thicker. The standing area in the deck does feel lower, but not dramatically so. Also, the edges of the dugout area go wider and are more square, and the rails are thinner and higher. The effects of these changes are that secondary stability feels increased, but there seems to be a bit more of a delay until it kicks in.

I can better feel waves and bumps coming in from the tail and it seems to accelerate faster coming onto a bump. These changes however do come with a few tradeoffs. The deck is noticeably wetter and it doesn’t seem to drain as fast. It might benefit from the center drain planned for the upcoming Atlantis model. Something similar to the venturi type drain hole covers found on some competing dugouts. Foot steering seems less responsive, it’s a bit harder to find that sweet spot between the primary and secondary stability and hold it there.

The revised kick pad is a welcome addition with a pronounced ridge at the back. The ability to feel your rear foot on the pad helps buoy turns immensely, however, the ridge is still too far back and if your foot is on it, it feels like you are farther back than you need to be for a fast turn.

With the changes in the nose and tail, the trim characteristics have changed, I find myself standing 1-3” farther back on the board in relation to the center handle over the previous iteration. The board is also tail heavy when carrying it. Moving the handle back farther towards the tail could be a benefit to the board.

Another of the more 2020 SIC Maui RS dramatic changes is the construction. SIC Maui recently switched factories and somewhat quietly changed from “SCC” – Single Carbon Construction to “SF” or what they are calling “Super Fly”. The new construction is dramatically stiffer, which is super apparent to this paddler. The boar feels like it flexes a lot less as your paddling and reverberates less when smacking on waves. The change, when combined with the other changes, makes the board feel more connected, smoother, and yes, it feels faster.

But is it faster? Truth is I don’t know, my numbers don’t show it yet. With the exception of a paddle on a fast-moving river, I haven’t set any personal records on it yet. I have mostly paddled it in choppy and windy conditions that have not been conducive to PR attempts, and I am still getting used to it being 1.5” narrower. I have, however, matched my best times on the previous model. Perhaps I get dialed into the new board there are some new PR’s in my future.

In conclusion, I think SIC is being modest with this one in describing “subtle changes”. It still looks like an RS of old, but the changes feel more dramatic and feel more like a purpose build racing machine. It’s a better flat-water board without sacrificing too much of its rough water capabilities.