I am not a natural paddler, nor am I physically gifted with a paddler’s body. I’m short (5’5”), I have a short reach, and I’m overweight (190). However, I work hard and I compete to the best of my ability. I’ve been training with Paddle Monster coaches for the last two seasons and have made huge strides. I’ve gone from the back of the pack to the middle and am now at the back of the lead group most races.

I’ve owned at least a half dozen different paddles from a bunch of different manufacturers, some have worked better than others. While I work and train hard and consistently, I’m not opposed to “buying” a little speed. In July of 2019 I bought the flagship paddle from a well-known manufacturer and following conventional advice “smaller is better” I went from a 98″sq. blade down to an 88″sq. blade. The results were not dramatic. My cadence and distance per stroke increased modestly and I did notice some joint pain relief. It was an expensive investment for modest return.

While I continued to train and improve with the new paddle, I couldn’t help but feeling like I could overpower the paddle, that I just didn’t have as much resistance as I could handle when I was digging. At the same time, I had to focus to get a clean catch. The paddle was noisy in the water.

I had demoed a few Black Project paddles over the past couple of years, an was always impressed with how light they were and how good the flex felt, but never had the chance to use them long enough to see a difference in the numbers. What I had was supposed to be the best, why change?

Well the final straw was when I noticed I was losing ground in races to paddlers on similar, if not the same boards, paddling similar stroke rates, and similar fitness levels. The only difference being they were paddling Black Project. I wrote Chris Freeman, the founder of Black Project, asking for advice and had a response within an hour. I talked to him about what I wanted in a paddle, and after a little back and forth we settled on a Hydro with a medium flex shaft and an XL 95″sq. blade. Chris also convinced me to give the Sonic fin a try.

This time results were far more dramatic. My first paddle out, I matched my previous PR despite less than ideal conditions. I’ve had the paddle for 2 weeks and since them I have set new PR’s for 10k paddles, not once, but twice. I have also set 1 and 2-mile personal records. Sure I’ve been training hard, but there is no denying the new paddle has had a positive impact.

I attribute the improvement to cleaner catch and a blade appropriately sized for my body. I have to be less precise on entry, and feel like I can really put my full weight onto the top handle. The difference in just the reduction of noise on the catch, tells me it is going in cleaner and planting solidly.

The Sonic fin feels smaller and subsequently is less stable, but I’ve yet to feel like I was going fall off. More importantly, I haven’t had to stop and clear weeds once.

Nothing is perfect, and there are no rainbows and unicorns here either. Since my paddle is cut pretty short at 71”, I’m still not getting much flex despite the softer medium pattern. I think I’d like a “little” more flex. Also, my hands seem to sweat a lot, and are pretty torn up at this point in the season, but the texture on the shaft doesn’t feel great to me. With that said, many friends rave about the texcarbon shaft and love it, just a little abrasive for me.

My Black Project Hydro has been a great purchase so far. Hopefully when travel starts to be more normal again, I’ll be adding a travel paddle to my quiver as well. Also pretty curious about the Condor fin and how small is too small for my abilities. For now, I’ve got a quality paddle that has produced great results, and an awesome customer service experience on top of it all. 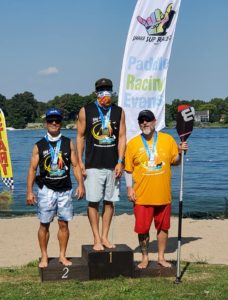