September 12, 2020 – For the 4th consecutive year Shaka SUP Racing was live in action on Lake Lansing, near the Michigan State Capitol. Once again, there were 4 great charities that participants could choose to donate a portion of their entry fee towards or split across all of them. It’s a unique model where no matter how you do on the racecourse, everyone wins. This year’s beneficiaries were:

All worthy causes hand-picked by race organizer Elizabeth Maxwell, the director and driving force behind Shaka SUP Racing. This was the 2nd of 3 events Shaka SUP Racing hosted in a bizarre COVID shortened season. All events hosted by the organization have at least one charitable beneficiary.

Thunderstorms threatened the in forecast, but as day broke the radar was clear but overcast with cool temps in the 60’s. I still 7-10mph breeze made things slightly choppy, but well within most people’s comfort level. Boat traffic was minimal and polite.

The racecourse was a fairly technical clockwise sideways “M” with 5 buoys, making for 4 right-hand turns and a single left. Was a good day for goofy-footers if they were brave enough to step back in the chop.  One lap for the short race and 2 laps for the long distance. 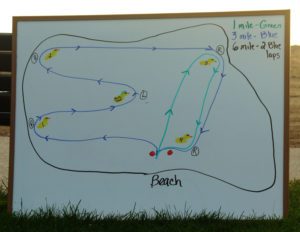 The 6-mile race was first off on a water start, followed by the 3 and 1-mile distances staggered in 5-minute increments. There were 28 registered paddlers.

As usual, the surfskis where the fastest craft of the day, and Yvon Dufour was the first across the finish line in a blistering 44:04. Mark Irish gave chase and kept Yvon honest trailing by just 26 seconds. Christopher Devries was the lone outrigger and finished just behind the sufskis. The traditional kayak class was well-attended with Jerry Gillissen taking top honors. David Ives and Thomas Behl completed the podium.

The SUP 14’ class was dominated by multi discipline waterman and Rapa Nui organizer Dan Novak. Dan managed to open an almost 2-minute margin over consistent top-finisher Karl Eugster.  The battle for 3rd was intense with Josh Flath Leading the way, while Harrison Withers, and Steffan Mueller gave chase. In the end, Josh was able to hold onto the podium spot, but just 21 seconds separated 3rd from 5th place.

The 3-mile race saw limited participation. The surfski class was won by William Morrow, while Men’s kayak was one by Rick Ensley. Women’s kayak was won by Rebecca Krick. Men’s 12’6” was won by Aaron Lugo in his first season of competition. Laura Kinne took top honors for the women. Patrick Reeg piloted his 14’ sup for the class win.

The 1-mile race saw the return of Angelique Meiu in her first race appearance of the season. She got husband John Meiu to join in the fun for his first ever event.  Angelique and John are well-known in the Midwest race community and it was great to see them again.

The Midwest Paddle League will be wrapping up the season next weekend, September 19th at Whatever It Takes on Gun Lake. With almost 60 entries to date, the event promises some stiff competition and an exciting finale to a very strange season.