On August 23rd, Shaka SUP Racing and the Midwest Paddle league was in action on Morse Reservoir just north of Indianapolis. This was the 5th consecutive year for this event, and every year a portion of the proceeds go to Guardian Angels Medical Service dogs, which provides medical service dogs for people with mental and physical disabilities, 90% of which are veterans.

As an added benefit, several paddlers also used the event to complete their personal Virtual Panda Paddle for the WWF, myself included.

The somewhat rare Sunday race event gave participants a chance to drive in on Saturday and spend a relaxing afternoon and evening enjoying the town and lake. About Half the field met up for a fun community social paddle Saturday evening, followed by merriment. Having family that lives on the lake myself. I was treated to a live concert by boat, pun by a local resident enjoying a birthday. It’s a different experience pulling up to someone’s back yard, dropping anchor and enjoying live music in a safe, social distanced setting

Because no event recap can be complete in these times without mentioning COVID, race organizer Elizabeth Maxwell, did a great job of providing masks and hand sanitizer, and clearly stated rules and expectations about social distancing. However, this event had an unexpected COVID related side-effect, Increased boat traffic. Morse Reservoir is the largest body of water in this part of the state, and has always been popular with the boating crowd, but this year, activity on the lake was notably increased presumably attributable to less availability of alternate recreational activities. The long narrow shape of the lake combined with plenty of seawall, and the popularity of wake surfing boats made the water very choppy with unpredictable swell from all directions. 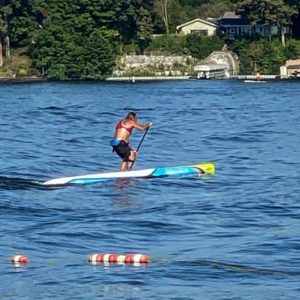 The 3 and 6-mile racecourse was designed to minimize time on the busy part of the lake, but nonetheless provided very challenging conditions. Both races featured a standing water start before heading northwest across the busy part of lake to the first left-turn buoy. Racers then headed southwest, to a right-hand turn into a no wake part of the lake. After a mile in the no-wake zone, racers navigated a 180-degree left-hand buoy and headed back towards the start finish back into rough conditions. The 6-mile race was 2 laps. The 6 Mile-race started first, with the 3-milers starting just a few minutes later. 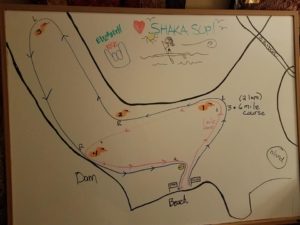 Laura reflected: With so few races this year I was just happy to be back with community!  Thanks to Elizabeth & Shaka SUP for having most of course in a no wake zone.

Jackie Kot: This is a very special group of people who have accepted me into their circle, for which I am so honored to be a part of!  The race was amazing, with some good challenges, the pre-race paddle on Sat was a lot of fun (even my unplanned ‘swim’), but the people were the best part of this event. The fact that it helps support charities that are so well chosen make it a TOP Notch event! Kudos to all who worked so hard to plan and execute this event!

Angela Mayfeild: It was a wonderful event with the most wonderful people!  The support and camaraderie was beyond what I expected for my first Shaka race.  I was happy to be around such wonderful and supportive people this weekend and helping a great cause for our Vets!

The 3-mile men’s division was a mixed bag with 3 paddlers all paddling 3 different classes. Nashville sax-man Adrian Barnett continued his winning ways this season in the 14” class, while Todd TerAvest battled on his surf style, against newcomer Aaron Lugo on His 12’6”. Todd got the better of it, making it to the line just 60 seconds before Aaron.

Aaron Lugo: Thank you all for getting together for such a great cause, it really means so much when I put faces to the heart behind these organizations.

In the men’s 14’ SUP class, Bryan Block was fired up and looking for a strong finish following a disappointing outing at Beach2Beach where a broken paddle locked him off the podium. Bryan set the pace from the start while Josh Flath and dog Ruby gave chase. After a slow start, Karl Eugster clawed his way into 3rd halfway through the first lap. By the end of the 1st lap the podium looked like a lock, with Bryan with a considerable margin over Josh, and Josh with a gap over Karl, but there‘s a reason we don’t just call the race after the first lap. Disaster struck as Josh’s passenger Ruby tired in the rough water early in the second lap, causing a fall and subsequent side trip back to the beach for a drop off. This allowed Karl into second, where Karl went to work reeling Bryan in. In the end Bryan held onto the win with a dramatic sprint to the finish, beating Karl by just 6 seconds. Yours truly Harrison Withers, was able to capitalize on disaster and snag the final podium spot.

Karl Eugster: Awesome event with fun Midwest community, well organized with great weather and occasionally challenging conditions, I personally had a late start but slowly caught up to race leader Bryan. Happy with my second place and especially happy to share the podium with Bryan and Harrison.

Josh Flath took a remarkable 4th considering the unplanned passenger drop off. There was also a close battle for 5th with Tom Wernette and Alexander Castrodale going head to head. Tom was able to get the better of the contest by just a 3 second margin.

Josh Flath: It was amazing coming out to a race that supports a cause that is so close to my heart with the 4THE22 crew! We are so proud of Aaron Lugo (the first recipient of the Board for our Heroes Give Away) for taking the podium!

The Midwest Paddle league is back in action in September 12th in Lansing Michigan with Paddle for YOUR Cause, another great Shaka SUP event. 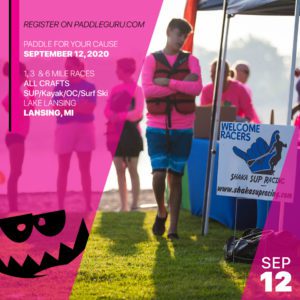