Deep in the heart of the South Pacific is an island that is known for its giant head statues, called Moai. The western world calls it Easter Island, but the Polynesians, the original inhabitants of the island call it Rapa Nui. History suggests the island was originally populated by tribal members who paddled canoes from nearby islands. The population eventually grew until there was 9 tribes or Hanau. Every year the tribes would hold a competition called the Tangata Manu  where participants collect the first sooty tern (manu tara) egg of the season from the islet of Motu Nui, swim back to Rapa Nui and climb the sea cliff of Rano Kau to the clifftop village of Orongo. The winner’s tribe would then be honored for the next year. 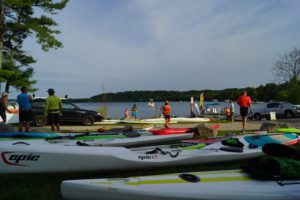 On August 8th, the Midwest Paddle League was back in action in the Traverse City, Michigan area, to honor the legend of Rapa Nui and the Tangata Manu. The Rapa Nui race is the Midwest’s more diverse and unique event in terms of both the competition and it’s participants The premier race features 3-mile open-water paddle to Power Island, a 2.5-mile trail run around the perimeter of the island picking up a symbolic “egg” along the way, and a 3-mile paddle back to the start/finish.

This year’s event was completely sold out per social distancing guidelines, with 87 entries across the recreational and full distance races. More than that, entries included a wide variety craft including Kayaks, surfskis, outrigger canoes, and paddleboards. A full 30% of the entrants were women, and a remarkable 13 participants were over the age of 60.

Race day brought overcast conditions with a healthy breeze that kicked up a difficult 2-4’ swell just outside the harbor. The water start in the calm waters of the harbor hid the difficult conditions participants were soon to face. The recreational distance of the 3 miles was a 2-buoy affair, straight out into the swell and back to the harbor, while the full distance race continued straight into the swell to the island. The difficult headwind tempered by the promise of a fast downwind return leg that did not disappoint.

The recreational distance was an all-SUP field with almost all participants electing to paddle race boards with a single Surf style. Todd TerAvest was the brave soul on the planning hull and was still able to post the 3rd best overall time in the short race.  On the race boards, the women’s division was spread out with Kristel Coronado-Adair posting the top time, followed by Denise Green and Cara Collier. Cara edged out League regular Leslie Maclin by just 30 seconds for the final podium spot. In the Men’s division, Regulars Adrian Barnett and Patrick Reeg had a battle with Adrian pulling out the win by just 5 seconds. Todd LaBonte took the third and final spot on the podium.

The long-distance race was dominated by Surfskis, and tandem craft. The fastest time of the day was set by Robert Hartman on his surfski with a blistering fast for conditions 1:09 time. Joe White and Denny Paul rounded out the surfski podium a few minutes back. The women’s surfski division was won by Mary Kay Aufrance. Gwenn Stevenson finished second.

One of the more exciting match-ups of the day was the cross-class tandem race between the team of  Nick Walton and Yvon Dufour aboard their tandem surfski and the team of Mike Davis and Bruce Barton abord an OC2. In the end, the surfski was just 3 seconds faster. However, in a rare showing here in the Midwest, there where multiple tandem craft. Nick and Yvon where joined on the tandem surfski podium by the team of Nick Murray and Hayden Murray. Another great match-up for the day was the in the Women’s OC2 division. Virginia Condie and Mary Schlimmer took top honors, with the teams of Holly Reynolds and Amy Solak, and Kristi Treston and Katie Treston, finished less than 2 minutes behind.

While the OC2 division was predominantly women, the OC1 class was all-male affair. Matt Meersman took top honors, with Peter Mead and Avery Folk rounding out the podium. There were 12 entries in the OC classes overall, reflecting the growing popularity of OC racing in the Midwest.

The 14’ SUP class was the largest class of the day with 20 entries. The women’s race promised to be contentious, with Susie Grace, Kattie Carpenter, and Ryan Meade lining up for the second time in the span of just a few weeks. Susie and Kattie are both great runners, and the island promised to be a difference- maker. In the end, Susie got off the island first and was able to translate the fast downwind leg into the win over Kattie by a modest 2-minute margin. Ryan Meade came in third for the final podium spot. Lisa Pointe finished the race on 12’6″ board. Women’s ’14 sup winner Susie Grace commented:

Rapa Nui is my favorite race of the year. Paddling to Power island, trail-running around it, and then paddling back; it’s a lot of fun. This year we were fortunate with some downwind conditions on way back, which was an awesome way to finish.

In the Men’s 14’, local Paul McMullen translated his knowledge and experience into the overall win. Fast series regulars Josh Flath and Bret Schapman rounded out the podium. Bret edged Jim Misiewicz off the podium by just 11 seconds.

7 participants braved the course aboard kayaks shorter than 18’, 5 Women and 2 Men. Hannah Davis won the women’s class, followed by Lynne Calais and Aurora Price. Ethan Goss came out on top in the Men’s division, with WILLIAM MORROW taking second.

In an increasingly rare occurrence, there was also a separate 12’6” class in the long race. Garrett Garner go the best of it in the men’s class, followed by Miles Prendergast who paddled a home-made skin over frame board with very little rocker. Steve Leibrandt took 3rd. For the women, Stephanie Dow took 1st, with Erin Bowles coming in 2nd.

It’s also noteworthy that race organizer Dan Novak, completed the course on a prone, and the team of Wendall Martin, and Mary Radke, shared a single 14’ inflatable board.

A light rain began as the last finishers were completing the long race, making for a brief awards ceremony, but no amount of moisture could dampen the enthusiasm and excitement of completing a difficult race, on a challenging day.

The Midwest Paddle League is back in action on August 15th with a brand new event called Beach2Beach in the Chicago region.