September 19, 2020 – When most people think about challenging conditions, visions of Red Bull’s “heavy water” come to mind. Visions of Zane Schweitzer cresting a 6-foot monster swell or Terene Black hammering just feet from a menacing rock. Ocean paddlers get all the glory, and the Midwest has a bit of a napoleon complex about it.

Sure, the coasts have big surf, but here in the Midwest our water turns solid every year. It’s a time of the year most paddlers dread, our season has an expiration date. Every year we not only race each other, but we race the sobering and eventual end to all the things we do while water is still in liquid form.

This year the last race of the Midwest Paddle League season was Whatever It Takes on Gun Lake. It’s only fitting that this race not only marked the end of a very challenging season, but also a reminder that our time on the water is limited. 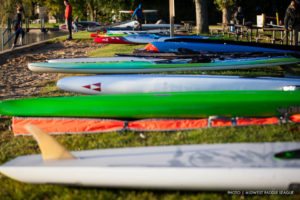 An event record-setting 68 paddlers, signed up for this years’ race. It’s a testament, to efforts of the event organizer Shaka SUP Racing and it’s director Elizabeth Maxwell. Her events continue to get better and better every year and she’s earned the trust of paddlers who know she puts on a great event. But it’s also a testament to the fortitude of the Midwest paddler, who despite COVID-related challenges, still managed to train, and show up to race despite those challenges.

That fortitude was put to the test race morning when paddlers woke up to frosted-over boards on car rooftops and a healthy layer of ice on their windshields. Our season has and expiration date, and it’s coming. 38-degree temps are just a different kind of challenging condition that the Midwest paddler learns to overcome.

Luckily, cold temps where the worst of the challenges paddlers would face on race day. Dawn broke across the well-groomed public park that would serve once-again as the race venue, Fog gave way to sunny skies, low winds, and calm conditions. Cool temps also served as a natural deterrent to boat traffic. 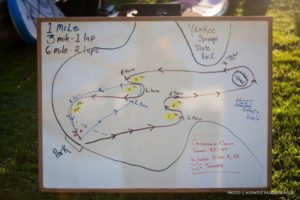 The race course for the day was unique and technical, as 3 and 6-mile paddlers would head east ¾ of a mile, navigate a tight set of left/right buoy turns, before continuing east around a small island with a shallow rocky shore, before heading back west. Another set of left/right buoys halfway back before the 3-mile finish. 6-mile racers would navigate a buoy at start/finish before setting out on a second lap. The 1-mile race-distance was a simple one-buoy layout.

The 1-mile race set off first for the day and was largely a family affair as the Davis-Kelly family made a day of the event. For kids Leon and Andre, it was not only their firs race, but also their first-time paddling. Adults Pam Kelly and Lisa Davis tied their best, but the kids were able to come in a a few minutes ahead. However, surprise of the day was Keira Conway, daughter of beloved Midwest race organizer and racer Keith. Keira blazed the course in just over 18 minutes and easily won the event despite being the youngest competitor and her first race. Here’s to hoping  this is just a start to the Conway father/daughter racing legacy.

The 6- mile event was next on start list and with 33 entries promised to be a barn burner. As usual, the surfskis posted the fastest times of the day in just over an hour for the 6.6-mile course. Yvon Dufour and Mark Irish battled the entire race distance in a repeat match-up of the Lake Lansing race the week before.  While this week’s match up turned out once again with Yvon finishing on top, once again Mark  kept the margin of victory extremely thin finishing just 30 seconds behind. John Henderson took the 3rd spot on the surfski podium.

The Men’s SUP 14’ class was the largest class of the day, but with Daniel Novak in the lineup, the result is almost a forgone conclusion. Dan does it all, SUP, Prone, and OC1 and he’s fast on all of them. Dan set the pace with a 1:11 finish. Alex Sandler trailed ready to pick up the pieces should Dan have made a rare mistake, but ad to settle for second. Bryan Block turned up the heat to beat Karl Eugster for the final podium spot.

The Women’s 14’ class was a showcase for Kirsten Marina Lefeldt as she put on display why she’s currently the 3rd fastest ranked pro woman on the APP Fast Track leader board. Kirsten set the pace building a massive 5-minute margin of victory. Kattie Carpenter was in second-place at the end of the first lap, but Julie LeFeve kept her head down for the pass, and eventual 2nd place finish. Kattie and Julie have a had great battles this past season, and will only get faster as they both gain experience and time on the water. Laura Knapp was the lone 12’6” women’s entry.

The 3-mile race started a few minutes after the 6-milers were away in a staggered start.  The 3-mile distance promised stiff competition and fast times. As with he longer distance, the surfskis set the fastest times, as David Ives bested William Morrow. Rick Ensley beat Dean Failer in Men’s Kayak. Linda Mcginess was the fastest female kayaker followed by Madelyn Notembaum.

The women’s division provided some of the most exciting competition of the day. Valentyna Artamonova and Laura Kinne battled despite being in different classes. While Valentyna got the better of the head-to-head, both won the 14’ and 12’6” classes respectively. Lucky Miller wasn’t far behind to take 2nd in the 14’. Erin Harvego rounded out the 14’ podium on a borrowed board in only her second race.

The best match-up of the day was another cross-class competition between Angela Mayfield and Amber Yeaton. Side-by-side for most of the race, Amber was able to cross the finish line first by less than one-second. The finish earned Amber 2nd place in the 12’6” class. Tammy Husingh rounded out the 12’6” podium.

Race photos can be found here.

After the racing was done for the day, and the medals handed out, racers convened at a local watering hole for food and reflection on the 2020 season, and a free clinic from Great Lakes Surf Shop’s Brian LeFeve. What started out as a day with questionable conditions, turned into a great day of both competition and community. While our season has an expiration date, our community has been tested  by conditions and COVID, and has proven itself with a fortitude often found in the Midwest.