Is it safe to return to the water? The ubiquitous two note theme song played, but that danger wasn’t a shark fin cutting through the water surface, but rather the far more silent and deadly sickness that has already victimized and torn to shreds 7 events from the Midwest Paddle League season schedule.

There was chum in the water, and many wondered if it was too soon. Many others still wondered if there wasn’t a last-minute cancellation just over the horizon. Regardless, the state of Wisconsin is open for business, and the Midwest Paddle Festival confirmed they were on “go” status with some modifications:

A complete set of Race Photos can be found here.

Scroll to the end of the article for full results.

Race morning brought clear blue skies, mid 80-degree temperatures, and a breeze blowing 6-8. It was a beautiful day, in a quaint waterfront park in downtown Oconomowoc, Wisconsin, a city with more O’s than a honeymoon suite. Participants did a great job spreading out across the large green space area, and spectators where thankful for water side picnic tables with umbrellas along the shore. A great race location, with easy access to shops, bars, and restaurants, all of which appeared to be following some sort preventative measures. With that said, it appeared most participants were being pretty cautious and staying out of indoor community spaces.

Old friends and new reunited, hugs and handshakes where replaced by fist bumps, masks were temporarily pulled down to reveal identities. There was a common theme circulating through the park, a common desire to test oneself, to see where fitness levels were, to test the training, or lack thereof in a forced new reality. The nerves were palatable at the racer’s meeting, as folks maintained social distances, forcing the organizer Cris Rosario to resort to a megaphone.

The racecourse was a clockwise circumnavigation of Lake Fowler, a smaller calm lake that connects to the larger lake Lac La Belle. From a water start, the course headed east to a bridge that served as the first buoy turn, before heading north along the shore to a buoy on the north end of the lake. South along the shore to a slight right around a peninsula, and back to the start finish for an approximately 1.5-mile lap. 9 buoys per lap, 3 of which required more than foot steering, making this a fairly technical course that heavily favored regular footers and frustrated those of which, myself included, who turn goofy footed. 2 Laps for the 3-mile race, 4 for the 6-Mile distance. 100-yard dash foot run finish.

The 3-Mile race got underway promptly at 8:30. Video of the start can be viewed here. 19 participants lined up for an incident free start. By the end of the first lap, the race order had been established with eventual Men’s 14′ winner Sam Edwards leading the way with Midwest Paddle League regular Adrian Barnett in the draft. The Men’s 3rd place finisher was Alexander Castrodale. In the 12’6″ class, John Branck took top honors, follwed by Michael Migono and Aaron Lugo. On the Women’s side the 14′ class Cheryl Perlis was able to establish and early lead that she held throughout the race. Julie Hollingsworth gave chase but was unable to close the distance. Valentyna Artamonova rounded out the Women’s 14′ podium. The women’s 12’6″ class was won by Jill Bloemendaal, followed by Shannon Blay and Jessie Flath. The most exciting finish in the 3-mile, was the neck and neck sprint between Jessi Flath and Aaron Lugo who where joined by Ruby the wonder SUP dog. It was Aaron’s first race and only 4th time paddling.

The 6-mile race got underway just a few moments after the last 3-mile finisher came in. 19 Paddlers and one dog, the aforementioned Ruby the wonder SUP dog aboard with Josh Flath. Video of the start. The whole field got away clean and fast leading to a crowded first buoy turn. By the end of the first lap, there was little doubt left in the race outcome as James Donovan had built a commanding 20 second plus lead. James ended up finishing the ~5.8 mile race in under an hour with a blistering 5.7 mph average. James reflected after the race:

“The Midwest Paddle Fest was my first SUP race in four years. 2020 has rekindled a fire inside of me to train hard and spread the SUP stoke. Even with a face covering and refraining from contact, MPF had all of the camaraderie of a coastal race, but at a paddler and spectator friendly lake in the middle of a quaint Midwestern downtown. SUP racing is alive and well in Wisconsin!”

Javier Diaz, came in second, in his first race EVER, with 1:02 finish time, beating quite a few fast regulars. “The Captain” Karl Eugster came in 3rd at the 1:05 mark. Last year’s 3rd place overall finisher Bryan Block was locked out of the podium with a fast 1:06 time. Remarkably, Josh Flath finished just 6 seconds behind, WITH THE DOG ONBOARD. Doug Vojtko, got the better of yours truly, despite me pushing him the entire race finishing with a strong 1:07 time, and a 7 second margin over me.

On the women’s front, Kirsten Lefeldt was the clear winner with a 1:07 time. Rachel Demitrios, and Becky Striet came in Second and third respectively. It is important to note that almost a full 50% of paddlers at this event were women and their spirit and camaraderie was a good kind of infectious.

The Midwest Paddle League is back in action next weekend for the 45 North Paddle Festival in beautiful Traverse City Michigan. This Sunday race is sure to be one to remember taking place at vineyard on the shores of Sutton’s Bay. 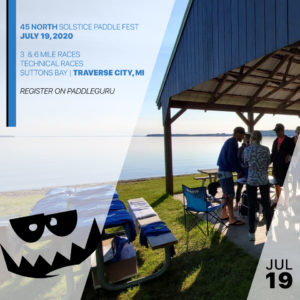